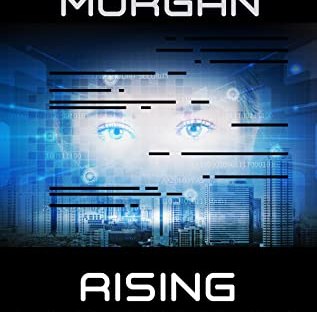 It seems, I have a complicated time getting into cyber and techno punk. It is not like the previous ones I have read are not good stories, I just could not get into them. The techno babble would sometimes get over my head no matter how often or ways the author describes the technology. I feel like Jack from Stargate yelling at Sam to dumb it down. But I never quit looking and I am glad. I love this story!

Eloise Moretti is an elite or someone born into the higher part of society in this futuristic world. She hides behind her computers as a hermit, naïve to what it is like in the real world. But her skills in VR are above and beyond anyone in the field. At some points in the story, Eloise acts like a young child, refusing to believe what she is being told, until she is shown the truth. Eloise is a well-rounded and fleshed out character. Her story arc well executed, and she grew as a character. Will she show up in book 2? I hope so. I would like to see where her story goes.

Major Aisha Toscano goes undercover in the justice system to understand who and where the corruption is coming from. She is my favorite character. I love her personality and how she carries herself. As a reader, you can tell she is hiding secrets about herself, which seems to be a lot. Aisha is a well-rounded and fleshed out character. Her story arc was well done, but I know there is more. I cannot wait to see where her story goes in book 2.

Colonel Mathias Larsen, like Aisha, goes undercover in the justice system. He is the brains behind their operation. Unlike Eloise, Mathais is well aware of what is going on around him. He wants to change for the good of the people and knows the cost if any part of his operation goes wrong, which is why he only trusted a handful of people, if that. Mathias is another character who was written well, and I cannot wait to see where his story goes in book 2.

The book’s setting is in the future on earth. Countries were remapped, renamed, and the social hierarchy reorganized. But the reader can still imagine this world and feel connected. Initially, I got confused about the social hierarchy. I still am, but I believe I have a better grasp. The technology was easily understandable and blended into the society very well.

I enjoyed this story a lot. The author mixed the thriller and science fiction very well and gave it an old war spy feel. I cannot wait to read book 2. I recommend this book to anyone who likes thriller, science fiction, techno thriller, cyberpunk, and dystopian novels.

*I voluntarily reviewed a complimentary copy of this book, and this is my honest opinion.

Fellow writers, check-in. Let’s be here for one another.
That’s me on the bottom 😂 I am not a morning person especially if I had a rough night sleep.
Happy Cover Reveal Day to @authorlilymiller!
😂 and this is why I hand write ✍️ I don’t get as distracted…… that’s when I type them up 😂 #writersofinstagram #writerscommunity #writer #writerslife #writers #writersofig #writersnetwork #writerlife #writercommunity #imawriter #iamawriter #distraction #distractions #distractiontactics #distractionsandinspirations #writerproblems #writerproblems101 #writingproblems #writingproblemsofinstagram
😂 this is so how I feel! I mean we are out of the 100s but I still want my 70s and below 😂 #Fall2022 #fall #fallvibes #autumn #autumnvibes #autumn2022 #autumnvibes🍁 #fallseason #fallseason2022 #fallseason🍁 #fallseasons #fallseasonishere #FallSeasonIscoming #fallseason🍂🍁 #autumnseason #autumnseason🍂🍁 #autumnseasons #autumnseason🍁 #autumnseason2022
🙂 What are you currently reading 📖? Are you reading more than one book 📚? Let's see 👀👀 some titles 🙂 #bookreader #bookreaders #reader #readers #readerlife #readersofig #read #reading #books #book #bookrecommendations #booktitle #booktitles